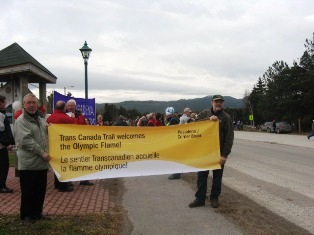 Enthusiastic crowds lined Highway 1 just before noon on Sunday, November 15th to greet the Olympic Torch on the third day of  its journey through Newfoundland and Labrador.  Trans Canada Trail volunteers and supporters plan to welcome the Torch at 25 Trans Canada Trail pavilions as it travels from coast to coast to coast on the relay to Vancouver.

The Trans Canada Trail in Pasadena and Corner Brook
Situated near the mouth of the magnificent Humber River, the Corner Brook Pavilion’s proximity to the Trans Canada Highway makes it a welcome rest stop for the thousands of visitors who pass through the Humber Valley each year to enjoy some of the region’s breathtaking scenery and pristine wilderness.  Initially following along the route of the old trans-island railway, the Trail is being re-routed due to highway expansion between Corner Brook and Pasadena.  To the south of Corner Brook, the T’Railway skirts a number of small coastal fishing and farming communities, while crossing over many of the large salmon rivers flowing into the Gulf of St. Lawrence.   Just past the town of Deer Lake, the T’Railway leaves civilization behind and heads east across the Gaff Topsails.  Technically known as a peneplain, or ancient eroded surface, this desolate plateau is covered in bogs and shallow ponds and dotted with glacial deposits and large boulders.