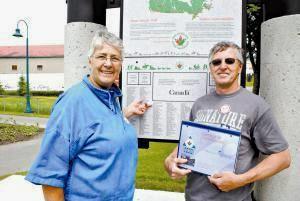 On Thursday June 19, New Brunswick’s fourth Trans Canada Trail pavilion was unveiled at the Fraser Marina in downtown Edmundston.  Over 200 donors were recognized for their contribution to the Trail.

In 1999, École Cormier set out to raise enough money to purchase a metre of trail to represent each province and territory: the only missing pavilion inscription out of the 13 was in their hometown pavilion, which now holds the name of École Cormier.  Teachers Patricia Thibodeau and Gaétan Martin were on hand to finally see this happen.