Beyond Omemee on the Kawartha Trans Canada Trail

You don’t have to go far to get away. Cycling part of the Kawartha Trans Canada Trail makes for an easy weekend jaunt from the Greater Toronto Area, with an abundance of natural highlights and that million-miles-away feeling.

From Lindsay to beyond Omemee, this 24-kilometre journey serves up unadulterated cycling joy. The Town of Lindsay is a crossroads of trails, with enough diversions to occupy a day, including a trail spur that actually goes inside Fleming College to showcase its innovative sustainability features. From Lindsay, the landscape unfolds from suburban to pastoral farmland, to the nature of the Kawartha Lakes region, with one of the largest drumlin fields in North America and the Doube’s Trestle Bridge, a former railway bridge spanning the luminous Buttermilk Valley.

Day 1: In and around Lindsay

A fascinating starting point for a leisurely exploration on the Trans Canada Trail is Fleming College’s Frost Campus on the southern end of Lindsay, one of the most sustainable college campuses in North America. The Kawartha Trans Canada Trail cuts through the heart of the college, which bills itself as a “living lab for outdoor learning.” Home to the School of Environmental and Natural Resource Sciences, here you can learn to climb trees, build trails, grow sustainable agriculture, make water clean and much more.

Hook up with the Trans Canada Trail on the south end parking lots, and then head around the back of the buildings to the campus courtyard, where a towering wind turbine spins in the breeze. Estimated to produce 10,500 kilowatt-hours of electricity a year, the wind turbine powers the lighting in the environmental technology wing of the campus. Gaze up to the roof of the wing, where a research platform tests green roof technology.

Here a spur of the Trans Canada Trail, called the TD Canada Trust East/West Discovery Trail, actually detours inside the environmental technology wing. The doors are usually open, so it’s easy to park the bike and look around at some of the fascinating sustainability features, such as the Centre for Alternative Wastewater Technologies. So, when you wash your hands in the bathroom, the water you use was treated just steps away. The Centre’s wetland ponds, visible from windows in the hall, collect about 3,000 litres of wastewater from the washrooms in the wing every day and treat it.

Also, along with displays of Ontario’s flora and fauna, you’ll find a living wall at work, filtering the air and decorating the hallway. In front of the living wall, visitors can see one of the geothermal heating wells through a plexiglass viewing cell in the floor. The geothermal system keeps this wing of the college warm in winter and cool in summer. There are 66 wells in total, each 122 metres deep and connected to an extensive coil system.

Veer off the Discovery Trail to the other wings of the campus, and you’ll find glass cases displaying taxidermy of Ontario birds and wildlife, as well as some beautifully intricate black and white murals, featuring trees and insects.

Back outside, wander beyond the wind turbine to the Lindsay community garden with sustainable agriculture plots to see the College apiary, before jumping on the bike to hit the Trail.

Heading east at the edge of the campus, the Trail passes a rustic log cabin used for outdoor education. Here, a historical plaque pays homage to renowned naturalist and author Ernest Thompson Seton. He spent some of his childhood in Lindsay and was one of the founders of Boy Scouts of America. Although this was not Seton’s actual cabin, he probably would have liked it.

Cycling further, the Trail passes through the Fleming College arboretum. The arboretum follows the course of the Trans Canada Trail east of the campus, where things get a little wilder.

Heading east, follow the alluring forest path to skirt the banks of the Scugog River, once the heart of this community. The river served as a transportation network for the Anishinaabe Mississauga First Nation right into the 19th century. In Anishinaabe, Scugog means “submerged or flooded land.” Soak up the tranquility at this beautiful place, as red wing blackbirds chirrup and the lilies open for the sun.

Lindsay is a city of parks, but it was once famous for its trains and train stations. Like many other sections of the Trans Canada Trail, the 53.8-kilometre Kawartha Trans Canada Trail generally follows the gentle grade of a former railway bed. This makes for leisurely riding with no steep hills or sudden turns, giving you time to concentrate on the scenery. The Trail skirts Memorial Park, where a monumental display from another bygone era awaits the intrepid cyclist. The Railway Heritage Centre boasts a wooden caboose, a black Stelco 40 locomotive, a bright red Canadian National Railways steel caboose and more. In the warmer months, there’s also a brilliant flower display.

Turn off onto the Rotary Trail and take in the scenic natural beauty of the river path. A rustic bridge crosses the river to two parks: Nayoro and Lion’s Riverview. Nayoro Park honours the twinning of Lindsay with a Japanese counterpart, a relationship that’s continued over 50 years. Like the Trans Canada Trail, it reminds us that we’re all connected.

The river path leads to Lock 33, which first opened as a timber lock in 1844, along the scenic and historic 386-kilometre Trent-Severn Waterway. This lock allows boats from the river to reach Lake Scugog.

If you’re lucky or patient, you’ll see the lock in action, as boats pass through to the other side. On the far bank, the beautiful remains of the Old Mill is a ghostly reminder of a thriving past. Even though the mill was gutted by fire in 1978, it still retains a fascinating beauty.

At this point, you may want to settle into a local motel for a night. Alternatively, you could go further. Load your panniers on the bike and hit the Kawartha Trans Canada Trail for a nearly 20-kilometre ride to the town of Omemee and cycle camp a few kilometres north of the trail at Emily Provincial Park. There, you can watch the sun set over Pigeon Lake and wake up amid the natural beauty of Kawartha Lakes country. It comes highly recommended.

On a multi-day cycling trip, the journey becomes the destination. Waking up in the morning, getting on your bike with everything you need packed behind you and simply cycling off is an incredible sensation of freedom. Then, your adrenaline gets pumping on Emily Park Road, a busy highway guaranteed to give a cyclist renewed appreciation for tranquility of the Kawartha Trans Canada Trail and its lack of motorized vehicles.

Once you’re back on the Trans Canada Trail, with its gentle grade and well-maintained limestone tread, your mind has room to wander. Simply relax and let go as you cycle east towards the pinnacle of trail highlights in these parts: Doube’s Trestle Bridge, a former railway bridge that spans the luminous Buttermilk Valley.

As the trail blurs under your wheels, witness the vistas open up before you to reveal the expanse of the Buttermilk Valley, as well as the famed Doube’s Trestle. Otherwise known as the missing link, the trestle bridge was built in 1883 to connect the railway between Peterborough and Omemee. The last train ran in 1988, and now there is only silence here.

Named for the Doube family, who owned land at the east end, the bridge was converted to rail trail in 2006. It now spans 200 metres, reaches 29 metres high and is about to be restored. The worn wooden decking will be replaced with environmentally-friendly composite lumber thanks to the Kawartha Trans Canada Trail’s fundraising efforts, and $75,000 in support from the Trans Canada Trail organization.

In the distance, catch a glimpse of an unusually shaped hill. This area is home to one of the largest drumlin fields in North America, a 900-square-kilometre remnant of the glacial era that stretches all around Peterborough to the west of the Omemee.

Cycling back towards Omemee through woodlands and wetlands, you’ll pass a bench that invites you to stop and sit down. This was once the site of an impressive beaver lodge. Today, you may find turtles, bees, monarchs and other butterflies, mesmerizing in the beautiful wetland.

Omemee! The town has a nice ring to it, which makes it sounds like a destination. The name comes from the Anishinaabe word for “pigeon.” Just before the bridge across the scenic Pigeon River, the Trans Canada Trail has installed a handy air pump and tool station where cyclists can fill tires, oil chains or do whatever they need to do.

As you cross the bridge, notice the shiny new deck of composite lumber, restored last fall in a community effort that took three weeks and several volunteers. Peer out into the scenic Pigeon River and imagine a young Neil Young fishing and running wild the way boys used to do. Omemee was where the lauded singer-songwriter spent his formative years.

According to the CBC, Neil Young penned the song Helpless as an ode to the town. Indeed, it gets a special shout-out in the opening lyrics: “There is a town in north Ontario / With dream, comfort, memory to spare / And in my mind, I still need a place to go / All my changes were there.”

Two years ago, Neil Young came home to play Coronation Hall on Omemee’s main street. As a boy, he lived at 33 King Street West – a short detour from the Trail in Omemee. You can also see the childhood home of the matriarch Lady Eaton, as well as the house she owned with her husband. Scott Young Public School is also on the Trans Canada Trail and is named after Neil Young’s father, who was an author and a journalist.

Cycling back to Lindsay, haunting forests give way to pastoral farmland. Breathe in the aroma of cedar, hay and fresh farm. Cedar canopy lines the Trail, which then opens up to reveal big sky. The sumac may be starting to turn, setting the Trail alight with orange. Silent country roads that seem to stretch into infinity. At the hamlet of Reaboro, you can rest at the picnic shelter.

When cycling the Trans Canada Trail, the journey becomes the destination, the rewards immeasurable. 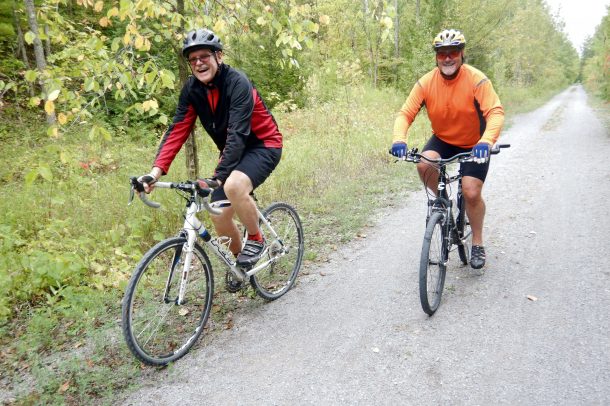 “It’s great how the government and individuals got together and made this happen. I believe the Trail is an amazing opportunity for people. It’s great for Canada and for everybody.”