A Marathon Push for the TCT in Saskatchewan 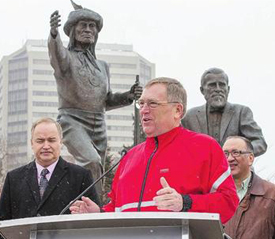 On June 21, the PotashCorp Mayor’s Marathon Day in Saskatoon will bring people out to enjoy the city’s Meewasin Trail—and help fund Trans Canada Trail development in the region.

Saskatoon Mayor Don Atchison made a public announcement on March 12 this year that he intends to complete a marathon on June 21, which is National Aboriginal Day.

What’s more, the 63-year-old municipal leader (who’s been training for months) has invited people to join him by turning his efforts into an event—the PotashCorp Mayor’s Marathon Day.

Equal parts fitness challenge, fundraiser, and cultural celebration, the Mayor’s Marathon Day is a chance for participants to spend time running, walking, or wheeling along Saskatoon’s beautiful Meewasin Valley Trail—part of the TCT. The event will raise money for charity and help support Trail development in Saskatchewan.

“Wellness is just as important to me as connecting our communities together, and this event will help get people more active, outside walking the Trail and enjoying themselves,” Mayor Atchison says.

Participants can cover the entire 54-km marathon route—which runs between Whitecap Dakota First Nation and Wanuskewin Heritage Park—or tackle smaller distances of 2 km, 5 km, 10 km, or a half-marathon.  (Learn more about the event, or sign up, at www.mayorsmarathonday.com.)

“The Mayor’s Marathon Day is a celebration of healthy, inclusive community—something that unites the east and west ends of our city around this spectacular river valley. It connects Wanuskewin to the reserve and reminds us of our heritage on the land,” says Mayor Atchison.

Hosting the event on National Aboriginal Day, he adds, helps tie in the region’s cultural legacy. A special participant medal has been designed to symbolize the connections linking First Nations, Metis and European settlers.

“This area has been settled since before the Pyramids were built in Egypt,” Mayor Atchison says. “Saskatoon is an oasis on the vast plain—it’s the Paris of the prairies, and I hope by extending the Trail and holding events like the Mayor’s Marathon Day, more people will come and explore it.”

With the TCT and its Trail partner, the Meewasin Valley Authority, as recipients of funds from the PotashCorp Mayor’s Marathon Day, the event is meant to call attention to their plan to develop a 55km section of TCT “Destination Trail”, connecting Wanuskewin Heritage Park to Whitecap Dakota First Nation.

Currently, a mix of trail, water route, and highway comprises the section of Trail under development. It includes Chief Whitecap Waterway, a historic water route along the South Saskatchewan River. Development plans call for making the entire “Destination Trail” section as greenway.

“I think it’s important to extend the Trail all the way from the park to the reserve so people aren’t riding bikes or walking on the highway at any points,” Mayor Atchison says. “Instead, they can enjoy this absolutely beautiful river valley that is spectacular in all four seasons.”

Thanks to enthusiastic support from Saskatoon and other municipalities, Saskatchewan is on track to making a significant progress in Trail development by this summer.  Stay tuned!