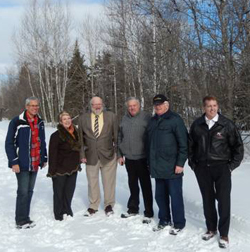 This summer, construction will begin on a new section of the Trans Canada Trail through the Town of Oxford, which will include a bridge crossing of the River Philip, thanks in part to a more than $40,000 contribution from the Trans Canada Trail. TCT Foundation Board Director David Hoffman attended the official funding announcement on February 12, alongside Mr. Scott Armstrong, MP for Cumberland-Colchester-Musquodoboit Valley on behalf of the Honourable Denis Lebel, Minister of Infrastructure, Communities, and Intergovernmental Affairs, as well as representatives of the Town of Oxford and the Municipality of Cumberland County.
“As well as creating a 5-kilometre loop around and through the Town of Oxford for local recreational use, this Trail-building project is a critical connection for the Trans Canada Trail on its way to completion in time for the 150th celebration of Canada’s Confederation in 2017,” Hoffman said.
The TCT in Nova Scotia is currently 42% developed, with 374 kilometres remaining to connect in time for 2017.