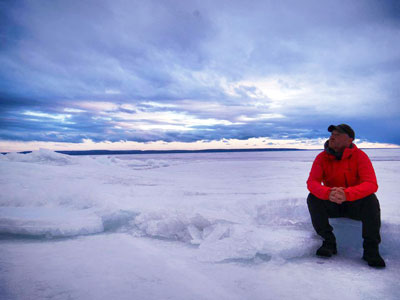 And Dana Meise’s friends, family and Facebook followers do indeed read on, often commenting, sometimes aghast, at stories that begin like this one, which he shared on Facebook in April.

Dana has no shortage of riveting stories waiting to be told as he treks from Fort Saskatchewan, Alberta to Inuvik, in the Northwest Territories as part of the final leg of his cross-Canada journey.

By August 2014, Dana will have traveled a total of 24,000 kilometers along the TCT, from the Atlantic to Pacific to Arctic coasts of Canada’s breathtaking landscapes.

Since he left in mid-April 2014 on the final 8,000-kilometer trek of the northern leg of the Trans Canada Trail, he has ripped a hole through his tent, broken his luggage carrier, had a standoff with a bear, and made friends with a couple of very friendly wild dogs. He has also met some very interesting and generous Canadians, who in several cases, after learning of Dana’s impending visit to their town, were waiting for him, ready to offer a warm meal, shelter, a hot shower, and a hearty handshake.

While friendly Northern Canadians may greet him with open arms, the Northern elements and weather await Dana bearing a different set of offerings. Flooded trail, deep sinkholes of mud and giant ice floes made for the rugged landscapes of the first few days of his journey. But he remains relentlessly cheerful, sharing his signature positive spin on almost everything, “I’m beaten up, however, one step at a time gets you to wherever you want to go.”