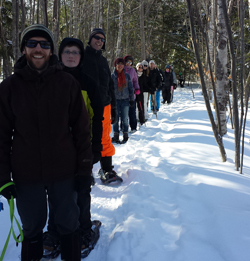 Snowshoeing along the newest section of the TCT in Trenton, Nova Scotia on February 15, 2015

On a day filled with whimsical wintry activities such as sleigh rides, and a bonfire with marshmallow roast, a brand new stretch of the TCT was inaugurated in Trenton Park, Nova Scotia, as part of the community’s annual winter festival, FrostFest.

Participants and local dignitaries Trenton mayor Glen MacKinnon and town councillor Fergie MacKay, alongside TCT Foundation Board Director David Hoffman, were brought by sleigh to the Trail head, where volunteers were thanked and a ceremonial “Raising of the Boughs” (similar to a ribbon-cutting) took place to officially mark the opening of a new section of the TCT in Nova Scotia.

This one-kilometre stretch of Trail cuts right through the heart of Trenton Park, which is one of the largest greenspaces in the province. The Trail will be open year round for walking or hiking, cycling, snowshoeing and cross-country skiing, and will help showcase all Trenton Park has to offer, including ponds, a playground, a swimming pool in the summer, and the forest.

The TCT extends heartfelt thanks to the Town of Trenton, Active Pictou County Trails, and Nova Scotia Trails for their part in the realization of this phase of the Trail project, which will, in its final phase, extend the Trail toward New Glasgow through woodlands and a picturesque ravine.

What a beautiful addition to the Trail in Nova Scotia, and to Canada’s national Trail!