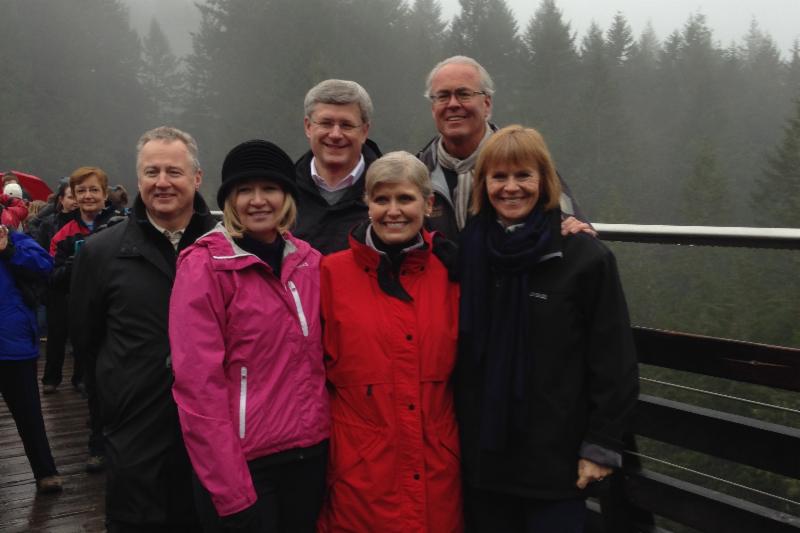 The spectacular Kinsol Trestle on Vancouver Island was a fitting location for the recent Government of Canada event, where Prime Minister Stephen Harper announced funding that will help bridge remaining Trail gaps and connect Canadians from coast to coast to coast in time for 2017, the 150th anniversary of Confederation.

The matching funds of up to $25 million over four years will be administered by Parks Canada; the agreement will provide one federal dollar for every two dollars raised by the Trans Canada Trail.

“The Trans Canada Trail will allow Canadians and international visitors alike to enjoy some of the most breathtaking scenery. We would like to get the Trans Canada Trail completed by 2017 for Canada’s 150th anniversary. It’s a big job, but we’re about 72 per cent done. Two of the things I love about the Trail are that it connects nearly 1,000 communities and provides users with a unique perspective on our spectacular natural and cultural heritage,” said Laureen Harper.

Valerie Pringle, Hartley Richardson, co-chairs of the Trans Canada Trail Foundation, Paul LaBarge, TCT chair and Deborah Apps, TCT president & CEO were on hand for the announcement along with an enthusiastic group of boy scouts and girl guides, TCT supporters and trail enthusiasts.

“We are absolutely thrilled to have the Government of Canada’s support for our bold goal of connecting the Trail by 2017,” says Deborah Apps. “The Government’s significant commitment to supporting TCT as a Canada 150 project, along with the contribution of our generous donors, will continue to build enthusiasm for completing the Trail and creating a tangible on-the-ground symbol of our pride in our nation.  We are so excited about celebrating our wonderful country on the Trail with Canadians from coast to coast to coast!”

The Trans Canada Trail was initiated in 1992 as a project to celebrate Canada’s 125th anniversary. Thanks to the efforts of thousands of Canadian volunteers and donors, nearly 17,000 km or 72 per cent of the Trail is already operational.  Once fully connected, the Trail will extend for nearly 24,000 km from the Atlantic, to the Pacific to the Arctic Ocean.