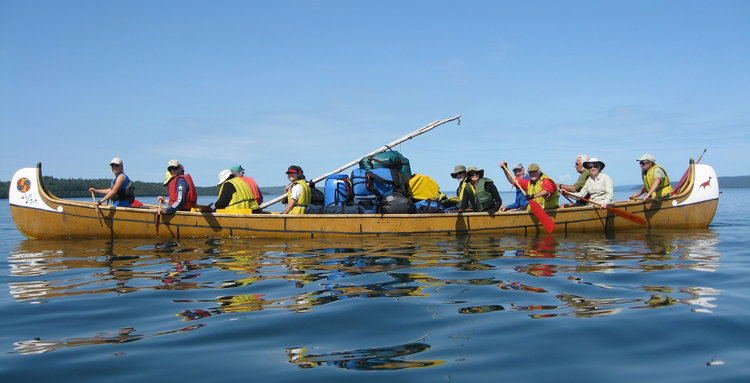 A nation emerged in the wake of birchbark canoes, the engines of the fur trade — Canada’s first industry. The canoe epitomizes our history. What better way to celebrate Canada’s 150th anniversary than to paddle the Lake Superior Water Trail, a section of The Great Trail?

Pukaskwa National Park is the wildest freshwater coastline in the world, a 180-km stretch of roadless wilderness that’s changed little since voyageurs plied these waters two centuries ago. This was a favourite destination of Bill Mason, a legendary Canadian filmmaker, artist and environmentalist. We’re fortunate to travel with his daughter, Becky, who has carried on her father’s legacy of wilderness canoeing.

The rugged coastline, stark islands and hardscrabble villages of Lake Superior’s north shore inspired some of Canada’s most famous landscape paintings. Pic Island in Neys Provincial Park still captivates the senses the same way it did in the 1920s, when Group of Seven painter Lawren Harris immortalized its curves on canvas. We’ll be joined by regional art historian Michael Burtch.

Musical gifts were cherished in the community of voyageurs. The best singers were awarded extra pay and an esteemed place in the canoe; folk tunes and ballads were the soundtracks of voyageur brigades, setting the pace for flashing paddles. This five-day journey ends in the community of Red Rock, home of the Live From the Rock Folk Festival.

Two hundred years ago, French Canadian voyageurs paddled the coastline of Lake Superior on gut feeling alone, racing fogbanks and navigating the island-choked waters at the lake’s northwest end by the seats of their pants. As commercial traffic grew, the need for lighthouses became apparent to safeguard mariners from disaster. Just as 2017 marks Canada’s 150th anniversary, it’s also the sesquicentennial of the first Canadian lighthouse on Lake Superior. This 75-km voyageur canoe journey visits several lighthouses, providing glimpses of their colourful history and the essential services they provided in what’s now known as the Lake Superior National Marine Conservation Area.

Towering cliffs, flat-top mountains and watery horizons mark the final leg of the Lake Superior voyageur route. Here, the canoe brigades plied open waters beneath the 300-metre flanks of the Sleeping Giant, a geological monolith and Ojibwa icon resting at the mouth of Thunder Bay. It’s easy to imagine the paddles flashing as big canoes raced to be the first to arrive at the infamous rendezvous at Fort William. Fur trade historian and folk singer Rodney Brown will be our special guest on this 75-km journey to Fort William Historical Park.