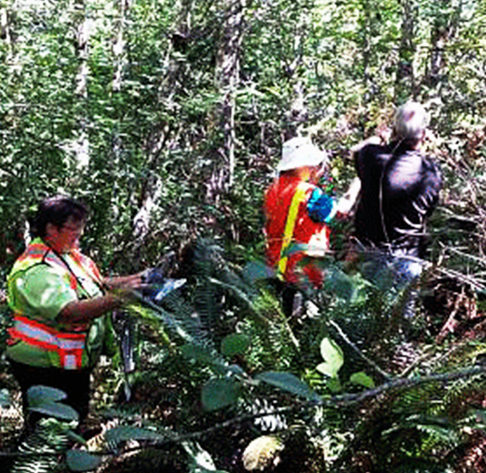 TCT: A big part of what we’re doing at the TCT is working with partners at the local level to get the TCT connected across the country by 2017, the 150th anniversary of Canadian Confederation. How does that play into the work you do?

CS: The Capital Regional District (CRD) supports the vision of the Trans Canada Trail and is actively working to create a new 13 km trail through Sooke Hills Wilderness Regional Park Reserve, which will provide part of the TCT route within the Capital Region.

TCT: How is the TCT most commonly used in Vancouver Island?

CS: The existing TCT is used by hikers, walkers, cyclists, and in some areas, horseback riders. There are many beautiful areas along the route that attract both area residents and tourists.

TCT: Tell us about the history of the TCT in Vancouver Island

TCT: What are some of the biggest challenges involved in building trails in the region?

CS: Three challenges come immediately to mind. Acquiring the necessary lands, or negotiating agreements to develop, operate and maintain a trail on someone else’s land is one. This is often a step that takes a number of years to achieve. A second is the steep terrain we have along some parts of the route. That can pose a significant

challenge for trail building. In the trail planning we try to avoid significant hills and other physical challenges, but that is not always feasible. For example, along the new Sooke Hills Wilderness Trail being developed by Capital Regional District, there will be a few locations where hills with 10 – 16% grades will exist. In some areas there is just no getting around the terrain—we have to go ‘up and over’ to reach the Cowichan Valley Regional District. That said, when you get to the top of some of these hills there are spectacular views as a reward for the climb.
Lastly, river and creek crossings are another significant challenge for trail building. On existing TCT sections on the island, there is a mix of bridges and trestles used to cross significant watercourses and there are further crossings needed in the remaining trails to be built. Some of the crossings are quite wide and the challenges include not only the cost of the bridges themselves but also how to get the bridges in place in remote areas where road access may not exist. Helicopters have been used in some park/trail situations.

TCT: What are the challenges of maintaining and caring for the trails?

CS: One of the first challenges is ongoing maintenance. The remoteness and terrain of some of the trails can make it more challenging to get to and maintain the trail than in the urban area. For example, keeping gravel surfacing on steep parts of the route will require more maintenance than on flatter sections. Getting the gravel surfacing materials into certain sections of trail that may not be as accessible by vehicle adds to the challenge. Also, as more trails are developed within the region there is increased need for trail maintenance crews.
There is also a need to ensure people remain on the trail and are abiding by park/trail rules. This is key to protecting the broader environment and for user safety and by doing both, it shows that trail users care about the trails. The managing agency may have concerns about increased potential for wildfires, particularly in the dry summer months on Vancouver Island, camping in undesignated areas, or access by motorized vehicles. In some cases, the trail managing organizations have established agreements with private landowners to allow the trail corridor through private lands, so it is important that trail users remain on the trail. In other cases, the parks that the trails are part of may include sensitive areas or key wildlife habitats and often times people don’t realize how much of an impact they might create if they are off the trail. It is important that trail users abide by the rules and that the management groups monitor to ensure that use and protection are properly balanced. I would say it’s important for trail users to do some pre-trip planning so they have a reasonable understanding of the trail they are heading to and what to expect. If they are aware of the expectations and are adequately prepared for potential issues, such as uneven terrain, lack of cell-phone coverage, or potential wildlife encounters, it helps all around.
Maintaining relationships with trail neighbours is also a key aspect of caring for the trails. Trails that pass through or by subdivisions provide residents with recreational opportunities close at hand and can enhance property values. These neighbours can help the managing agency by providing another set of eyes and ears in the area. Often times, these folks are the ones alerting the managing agency to issues that need to be addressed.

TCT: Tell us about other critical partners, people or organizations invested in connecting the Trail in Vancouver Island?

CS: Within the Capital Region, both the City of Victoria and the City of Langford are also supporting the 2017 TCT connection goal by creating part of the route within their respective municipalities. As noted earlier, the CRD is also working closely with our neighbour, the Cowichan Valley Regional District on this project. The Trans Canada Trail organization has been a tremendous support to those of us working on creating the remaining sections of the main TCT route, by providing day-to-day support and where possible, funding assistance.

TCT: What is the best part of your job?

CS: There are two ‘best parts’ of my job. One is working with a team of very dedicated people who care deeply about parks and want to find the best ways to both protect the natural values and provide opportunities for people to experience those values. The second is when I am out in the field, sorting out details of where a trail should go or looking at how to address a specific question or issue that has come up in a park. Those two things are the most enjoyable parts of my job. But really, could anyone ask for a better situation than getting paid to work on and in parks? I don’t think so.