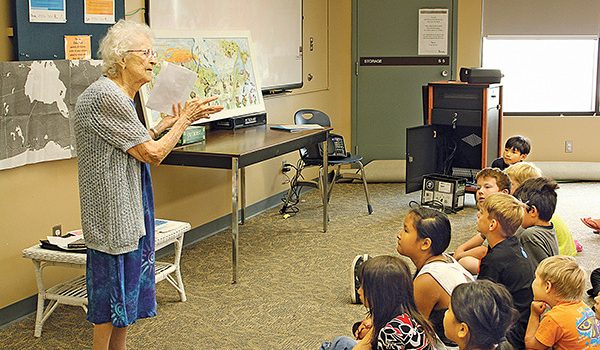 Nina presenting her map to students in 2015

Nina is 95, a retired registered nurse and a great-grandmother who lives in White Rock, British Columbia. She has been an artist and naturalist all her life, which began on a rural farm in southern Alberta.

Nina is also a keen outdoors enthusiast who loves the Trans Canada Trail (TCT). She first became interested in the TCT when it was launched in conjunction with the country’s 125th anniversary celebrations in 1992.

Earlier this year, she combined her love of art, nature and Canada by creating a three-dimensional six-foot wide map of the TCT.

Her map displays the route that the Trail follows across the country, with relief figures (made of papier mâché) of each province’s flower and species, and some key regional iconic structures, along with intricate landscape details. Nina says the project took her six weeks – roughly 120 hours – to complete.

Nina researched the Trail online, sketching, painting and moulding the relief figures on the map, in an effort to draw attention to the importance of preserving Canada’s wildlife and natural landscapes. She hopes her project will inspire others to explore the TCT, a “landmark” she said she’s proud of, for “what it represents to the Canadian Nation” – in her words.

Though she admits that at her age, she’s not able to hike much anymore, she said she loves to hear stories of others enjoying the Trail. One of her grandsons lives near the TCT in Halifax, N.S., and McLachlan said he and his children make sure to tell her every time they go for a hike.

“What better way to experience nature firsthand than to trek on the trail?” she said.

Nina has just written and is publishing a third volume in a set of memoirs about her life. She is grandmother to seven children and great-grandmother to nine others, including Jake (17) the eldest, Ruby, Autumn and Sage (all 3), the youngest.

TCT is proud to have such a dedicated supporter in Nina!