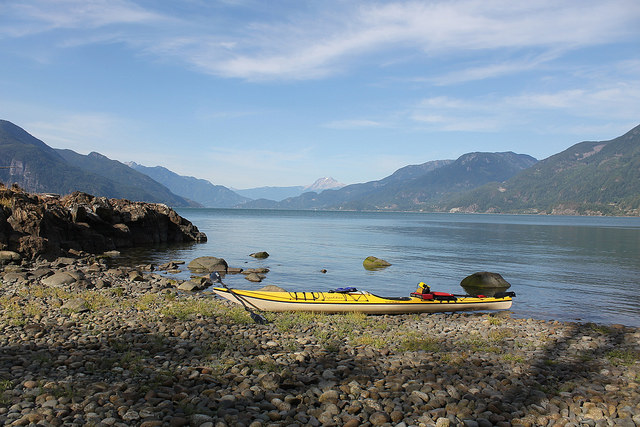 The Sea to Sky Marine Trail is a great example of a multi-stakeholder collaboration project. It is unique because it features the only saltwater route in the Trans Canada Trail network and required four levels of government, one First Nation, two non-profit organizations and the private sector all working together. It took five years to carry out this project that now offers opportunities for multi-day sea kayaking and camping trips throughout Howe Sound. The idea to create a marine trail came from the needs of three institutions.

First off, the TCT needed a connection between Horseshoe Bay and Squamish and this initiative was taken on by the Squamish-Lillooet Regional District. A land route proved to be too difficult to create at the time so a water route became the logical choice.

Secondly, Recreation Sites and Trails BC (RSTBC) was looking to develop campgrounds and promote recreation in the Howe Sound area. The ecosystem there was rebounding from a serious history of pollution and with wildlife returning to the area, recreational opportunities would be present.

The Sea to Sky Marine Trail offered a unique opportunity to experience and celebrate the environmental comeback of Howe Sound. The BC Marine Trails Association is a non-profit society that works with stakeholder groups and government agencies such as RSTBC to create campsites and access points along the coastline of BC. Six new waterfront campgrounds were created to accommodate the needs of paddlers taking on this multi-day paddling trip.

At the time, the Squamish First Nation also happened to be looking for ways to reconnect their youth with traditional landscapes. Howe Sound and Squamish Harbour are bodies of water that have been theirs for over 10,000 years. They were in support of the project because it would help to recognize their connection to both land and water, while allowing Squamish people to explore their heritage and culture like never before. They provided place names in their own language and have named this trail áyelh?w shewálh (which translates to “beach trail”).

Four municipalities, the Sunshine Coast Regional District and BC Parks later came onboard and their primary roles were to provide public access sites and campgrounds for the route.

Ocean Kayaking is a popular way to recreate on and around the West Coast of British Columbia. The Sea to Sky Marine Trail is within an hour’s travel from downtown Vancouver, providing a major new free public recreation amenity that will help connect people with their environment in a positive, healthy way.