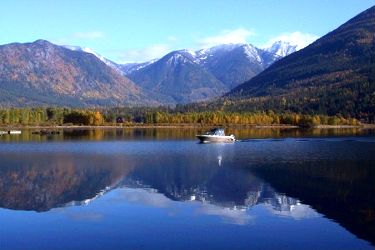 Crawford Bay and Gray Creek are communities situated in the Purcell mountain range on the eastern shore of Kootenay Lake in the Southern Interior region.

Currently the TCT follows Highway 3A for about 8km between these two small Kootenay villages. A newly formed trail group is now leading a project to re-route the TCT off highway and onto a non-motorized trail that uses segments of an old historic road built in the early 1900’s. A significant amount of support has been indicated by the Regional District of Central Kootenay (RDCK) and they were able to provide funding for the initiative. Also in support of the project are the Lower Kootenay Band (part of the Ktunaxa First Nations), the local Chamber of Commerce and some local businesses.

The trail group is working closely with Recreation Sites and Trails BC. They are a branch of the Ministry of Forests Lands and Natural Resources that develops, maintains and manages recreation on Crown Land.  In reviewing the project, it was discovered that the proposed trail migrated onto Crown Lands that have been offered to the Ktunaxa Nation as Treaty Lands.

In order to get approval from the Ktunaxa Nations Council, an application process was required and had to be reviewed by the Ktunaxa Treaty Negotiation Team. This is to ensure that the proposed trail project does not impact Treaty Land parcels. The entire Kootenay Lake area is traditional Ktunaxa and Sinixt Territory. First Nations people have been the caretakers of the land for many millennia and as part of this trail project, it is desired to offer some form of recognition through some interpretive signage placed at the trail head kiosks.

This project is still in the planning phase and it is hoped that trail construction and interpretive signage will be completed on time for July 2017, our deadline set for connecting the TCT across the country. This is yet another perfect example of a collaboration between non-profits, First Nations, local and provincial governments that will be necessary to ensure the success of another amazing TCT project.