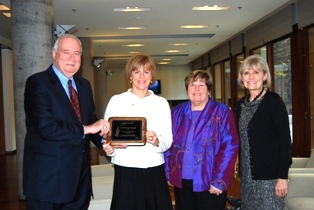 The Trans Canada Trail (TCT) has been honoured by the Society of American Travel Writers (SATW) with a prestigious 2010 Phoenix Award.

The Phoenix Awards are given annually by SATW for the “conservation, preservation, beautification and anti-pollution initiatives which further the growth and appeal of North American Travel destinations”.

SATW announced the awards at its convention in October in Saxony, Germany. SATW Past President Doug Hall and nominator and former Toronto Star associate travel editor Catherine George presented the Phoenix Award to Trail President and CEO Deborah Apps and Past Chair Valerie Pringle in Toronto in December. “Most people, even Canadians, do not grasp the significance of the Trail,” said a SATW reviewer. “The effort entailed to create this Trail is mind-boggling as it has involved all levels of government from the tiniest community councils to provincial and federal levels.”

“This Phoenix Award is a great honour for the Trans Canada Trail and a tribute to the many volunteers, supporters, trail groups and communities that are involved in planning, developing and maintaining the Trail across the country,” said President and CEO Deborah Apps. “The Trail is made of over 400 local trails, each with unique and varied features. This contributes to the diversity and grandeur of Canada’s national Trail.”