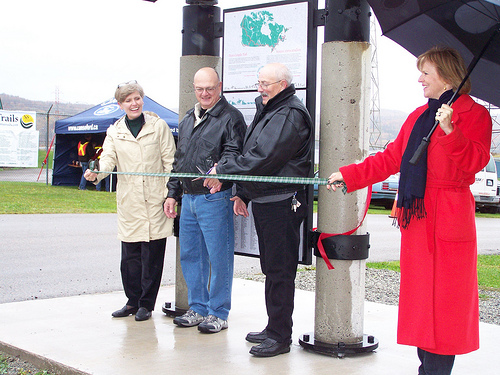 Nova Scotia hosted a milestone trail celebration in October with the signing of a Memorandum of Understanding and the opening of two pavilions and three trail sections in Cape Breton.

On October 26, TCT Chair Valerie Pringle, President Deborah Apps and NS Trails President Terry Norman met with Premier Rodney Macdonald.  They signed a Memorandum of Understanding establishing a cooperative working agreement among the signing partners to complete the Trans Canada Trail in Nova Scotia. “This is a real breakthrough for NS Trails and Trans Canada Trail.  It signals that the province understands the importance of the Trail and trail building, ” said Deborah Apps.

On October 27, there was a full schedule of events, starting with two pavilion openings in Truro and Port Hastings where the names of over 1600 donors were unveiled.  Many enthusiastic trail supporters were on hand, despite the fierce and biting wind that day.

Three sections of trail, totalling 92 kilometres, were officially opened with separate ceremonies – the Ceilidh Coastal Trail (in Port Hastings), the Judique Flyer Trail (in Judique) and the Inverness County Trail (in Mabou). The day finished with a wonderful dinner at the community centre in Judique with fiddle music, attended by dozens of volunteers who had worked on the Trail.

Nova Scotia Trails Board of Directors on the Trail in Mabou

Congratulations to all the volunteers and to NS Trails President Terry Norman, Executive Director Vanda Jackson and volunteer extraordinaire Blaise MacEachern who have worked for many years to develop these trails and who organized six successful events in one day!

Ode to the Trail Contest: Share for a chance to win!

The gift of the great outdoors: 2020 Impact Report

The Conference Board of Canada: New Report Outlines Economic, Health, Conservation Benefits of Trails
See All News
Thank you