A lovely day of celebrations on Prince Edward Island 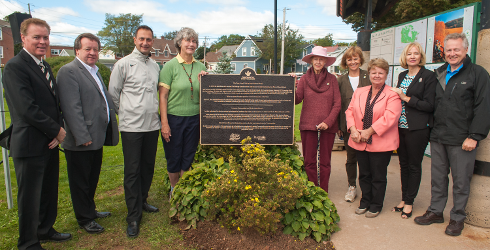 As of this September, residents and visitors to Prince Edward Island may bike or hike from one tip of the Island to the other along the Confederation Trail– P.E.I.’s portion of the Trans Canada Trail, now 100% connected.

The Island is the second province to connect its section of the TCT.

A plaque commemorating this achievement was unveiled at a celebration in Joe Ghiz Memorial Park in Charlottetown on September 12.

The event drew a large crowd of Islanders, uniting regular trail users, TCT representatives including President & CEO Deborah Apps, and an impressive array of local and national politicians and dignitaries, among them the TCT’s honorary Campaign Chair, Mrs. Laureen Harper, and the Premier of P.E.I., the Honourable Robert Ghiz.

Developed from the province’s former railway lines, P.E.I.’s Confederation Trail is 444 kilometres long, running from Tignish in the west to Elmira in the east.

The last 30 kilometres of the Trail, including sections from Stratford to Iona, were developed in large part thanks to a $1-million donation from Mrs. Nancy Baron, a Trustee of the W. Garfield Weston Foundation.

Mrs. Baron captivated the audience as she took to the podium, speaking earnestly of her fondness for a simpler, less rushed time. “The TCT will give everyone a chance to ‘stand and stare,’ ” Baron said, referencing a poem by William Henry Davies. “No honking horns, no sudden noises, no roaring engines, and hopefully no loud voices. Certainly not to rush, rush, rush, trying to get somewhere on time. À propos of nothing, snails have trails, and have no problem slowing down,” she said.

Prince Edward Island’s significant achievement brings the TCT one big step closer to fully connecting the Trail and Canadians nationwide by 2017, Canada’s 150th birthday. For information on the TCT in Prince Edward Island and its history, click here.