On a chilly January day, a friend and I pulled up the steep narrow road that would bring us to the Caledon Trailway trailhead. As avid hikers, we were prepared with water, snacks, layers and thermals. The sky was grey, but our spirits were beaming! We were about to begin the Caledon Trailway!

The Caledon Trailway is a 35-kilometre multi-use trail that runs through Caledon, Ontario. It follows an old rail line from Terra Cotta to Highway 9, and a portion of the trail is part of the national Trans Canada Trail network.

I’ve travelled extensively in the Caledon area, as well as hiked plenty of Ontario trails. So, when discussing New Year’s goals with a friend, we decided to start tackling some of Ontario’s rail trails, starting with the Caledon Trailway. It was an ideal trail since it was a relative middle ground between our two locations. 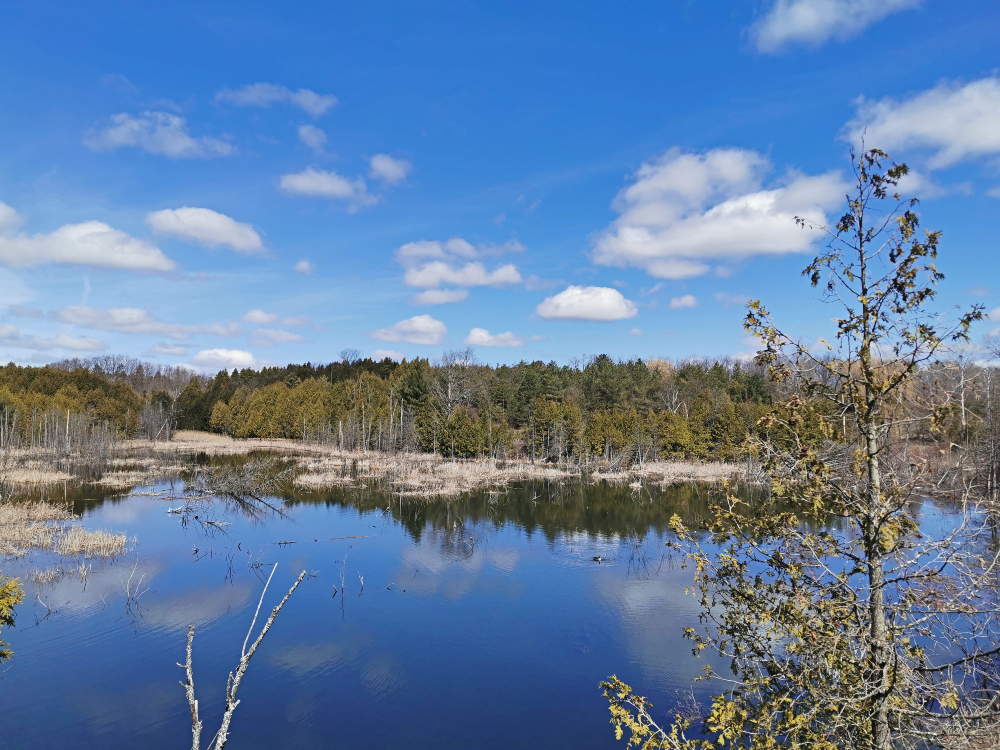 We decided to complete it in four segments. Each portion would be roughly 10 kilometres and end in a charming small town along the trail, where we’d indulge in a celebratory meal.

In every section of the Caledon Trailway, we discovered hidden Ontario gems! The first was the Cheltenham Brickworks. This massive complex was the first brickyard in Canada to mass produce and ship bricks both nationally and internationally by truck and rail. It’s now sadly abandoned but still stands as a testament to Canadian industry and rail history.

There are other historic sites along the Trail, such as old rail bridges. The remnants of one of these, known as the Cardwell Junction, can be seen along the Inglewood to Caledon East section. Here you’ll find an informational plaque telling the story of the Cardwell Junction. It was where the Toronto, Grey and Bruce Railway crossed over the tracks of the Hamilton and North-Western Railway. All that remains are the concrete supports and the embankments. 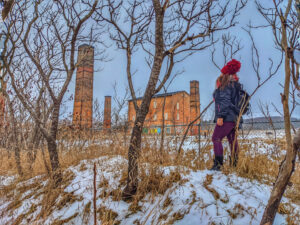 One thing that really struck me with every section of the Trail was just how much it had to offer. While many hunt for trails with epic views, I can’t help but reflect on what people miss out on when on these flat trails. Flat does not mean boring! Every segment of the Caledon Trailway included myriad treasures, from the historic rail sites to tranquil ponds. Oh, and the birdlife! As an avid birder, I was thrilled to spot various birds in ponds, brush and towering trees along the Trail. I spotted yellow warblers, a pileated woodpecker, and even a bufflehead!

Little did we know that when we first struck out on that chilly day in January that we wouldn’t complete the Caledon Trailway until July! But it was incredible to see the trail in the various seasons. When we began, the trail was lightly covered in snow. On our next section, we’d arrived just days after a snowstorm to find the trail topped with a thick layer of snow and ice. Soon after, spring had sprung, the snow melted and on a perfect summer day we bounded along the last few kilometres towards the end. Before us was an open field with Highway 9 towering above us and the small sign we’d seen countless times along the Trail marking roadways along the trailway. But this sign was different. At the top it read, “Thank you for visiting.”