Where to Find Stunning Lake Views in Saskatchewan 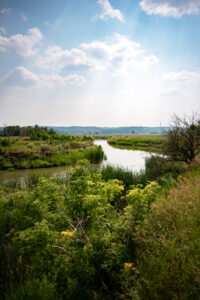 When many Canadians think about the prairies, they picture flowing landscapes of wheat. While Saskatchewan is known as the breadbasket of Canada, the province also offers some unexpected geographical gems: rolling sand dunes, dramatic badlands and massive lakes.

Lake Diefenbaker is one of those massive lakes. At 225 km long with 800 km of shoreline, the corkscrew-shaped lake was formed by the construction of two dams – on the South Saskatchewan and Qu’Appelle rivers – to create a consistent water source for agricultural irrigation and municipal water supplies. The lake is so big that, at certain points, it’s nearly impossible to see the other side.

The Trans Canada Trail joins Lake Diefenbaker at the southeast section, known as the Gordon McKenzie Arm, and then traces the eastern shoreline before eventually connecting to the Chief Whitecap Waterway.

We’re proposing a two-stop itinerary that offers trail users the best lake views and services. This itinerary works most easily with vehicle transportation between the two locations. Onsite, Trail users can choose to walk, wheel or snowshoe. 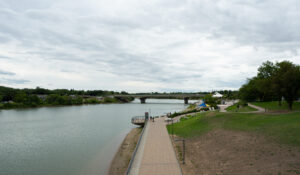 The Trans Canada Trail in Douglas Provincial Park features panoramic views of Lake Diefenbaker and access to beautiful, natural sand beaches. For an out-and-back adventure (with a small loop), start your explorations in the parking lot on the south side of the park, and stroll northward through pockets of lush woodland.

As you move northward, you’ll pass a beach. Lake Diefenbaker’s water is clear so take a look and see what you can spot. It is the largest body of water in southern Saskatchewan! For those who want to swim, summer is the prime moment to take the plunge. 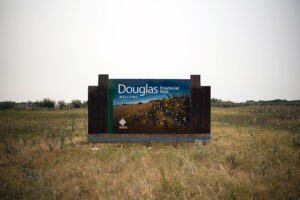 On the north side of the Douglas Provincial Park campsite (between sites 320 and 323) you’ll find the Sunset Hiking Trail, a two-kilometre loop that is rated easy and is accessible to hikers, cyclists and wheelchairs. This short trail offers a diverse range of habitats. Trail users will notice wetland meadows and large pockets of woodland. Plants and animals not usually found on the prairies occupy this habitat, such as tree species like trembling aspen and balsam poplar, and a variety of shrubs including twining honeysuckle, river birch and high bush cranberry. The Trail is also an excellent area to see and hear birds, especially in the early morning.

The path will circle back to the parking lot and you can prepare to head north to the next stop on the itinerary. Before heading north to the next stop (Elbow), there’s an option to visit the sand dunes nearby, located on the east side of Highway 19. For information or maps, ask at the park office, which you’ll find at the entrance/exit to Douglas Provincial Park. 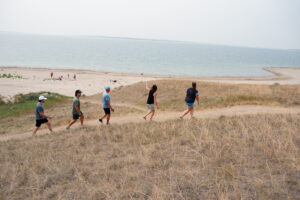 The charming town of Elbow is one of Saskatchewan’s little secrets. The village – which got its name from its position on the elbow of the South Saskatchewan River – is perched above Lake Diefenbaker. Elbow offers a range of services, including restaurants, RV sites, a grocery store, and even an art gallery. In Elbow, the Trans Canada Trail links with the aptly named Elbow Trail. 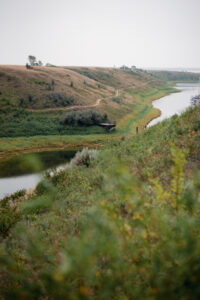 Start your Elbow adventure at the south end of the town at the Harbor Golf Club House restaurant, which has a picturesque patio overlooking the marina and is a perfect place to eat lunch. From the restaurant, the Trail descends and wraps around the harbour. You’ll have fantastic views of the Elbow marina (and its various moored boats), as well as a vantage point for sweeping views of Lake Diefenbaker. The Trail then curves back toward the golf course and through forested areas before opening again near the Elbow Lookout and once again at Tufts Bay. From here you can retrace your steps to make this an out-and-back itinerary (4.5 km one way; 9 km out-and-back), or you can walk back through the town of Elbow by taking Tufts Bay Road to connect to Railway Avenue. This will form a circle route that measures 8 km.

Those opting for the town route might want to refuel at one of the various cafes or restaurants. For a post-trail caffeine kick, stop at Mugs Coffeehouse (open during summer months) for their fair trade, organic espresso and in-house baked treats. Alternatively, the Back Home Bakery & Deli offers up some of the best home-style sandwiches in Saskatchewan.

Want to explore more of the Trans Canada Trail in Saskatchewan? Check out these other journeys:

Exploring the City of Bridges on the Meewasin Trail

A stroll under Saskatchewan’s skies

Park hopping along the Trans Canada Trail in Regina 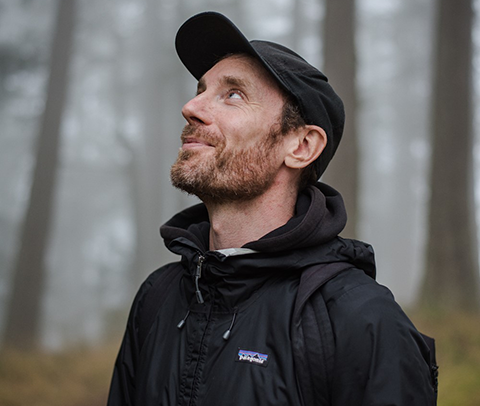 For Daniel, the Trans Canada Trail is a metaphorical thread that connects Canadians. The Trail unites us all. It’s also an entry point for Canadians to access natural spaces, which are vital for the health of our bodies and our minds.