A weekend in Quebec!

The route is especially magical in the wintertime. The Trail is mechanically groomed between kilometre 1.3 and kilometre 44 for both classic cross-country skiing and skate skiing.  Other sections along the trail can be used by snowmobilers, and the entire length of the trail is open for snowshoeing.

Here are some suggestions for a winter weekend along the Le P’tit Train du Nord, courtesy of our friends at Great Canadian Trails who arranged this winter weekend for guest Instagrammer Math Sparks.

Head to Val-David, which is at kilometre 42 on Le P’tit Train du Nord. The village is notable for its artistic character. Many renowned artists and writers have lived in Val-David, notably Québécois poet Gaston Miron, jazz bassist Charlie Biddle, and singer-songwriter Alan Gerber.

Drop off your luggage at your guesthouse. The Trail runs through the heart of town, so if time permits, take a quick stroll to move your legs and to get your bearings.

The town offers a selection of charming restaurants. Resto-Microbrasserie Le Baril Roulant is a great choice for a craft-brewed beer and an ambiance that reflects local style (read: warm woods and gentle lighting).

It’s time to hit the trail!

Should you need skis (or other outdoor equipment), rentals can be found at Roc & Ride. Head north, following the groomed trail for an hour or two. Pause for a break, and when you’re ready, head back the way you came.

Completed in 1909, the P’tit Train du Nord, for which this Trail section was named, played a key part in the economic development of the Laurentian region. The popularity of the rail line reached a peak between 1920 and 1940, largely because fun-seekers from Montréal began heading to the Laurentians to enjoy nature and skiing, which was the “in” sport of the moment. The P’tit Train du Nord made its final journey in late 1981, after which the route fell into disrepair. The old rail line was transformed into a leisure trail and opened in 1996.

Sleigh bells ring — are you listening?

If you’re looking for a relaxed afternoon activity, you can indulge your yesteryear winter fantasies with a brisk sleigh ride along a route that passes through mixed forests of maple, birch and fir. La Ferme Duquette offers sleighing adventures that last about an hour.

Indulge your epicurean side

For a taste of France, La Table des Gourmets makes for a sophisticated dining experience. Visitors can pair a three-course meal with a selection of fine wines, some of them locally produced. The owners are engaging, and the setting is intimate. Gluten-free options are available.

If the shoe fits

Spend the morning going south along the trail. If the snow is fresh and deep, we recommend trying your hand (or foot) at snowshoeing. If the weather lends itself to icier conditions, Roc & Ride also offers walking crampons to help trail users navigate the elements.

Magasin General Val-David is a charming general store. If the sun is shining, sit outside on the porch to watch village life roll by. The shop offers a selection of original gifts such as gourmet condiments and home décor.

For the welcoming atmosphere, the tasty local cuisine and the picturesque outdoor spa. Groups, couples and families will love the cabin’s rustic décor and wood-burning fireplaces!

This charming and serene B&B is located directly next to the waterfalls of the Rivière du Nord and enjoys direct access to Le P’tit Train du Nord trail. The studios are the best option for families and independent travellers. 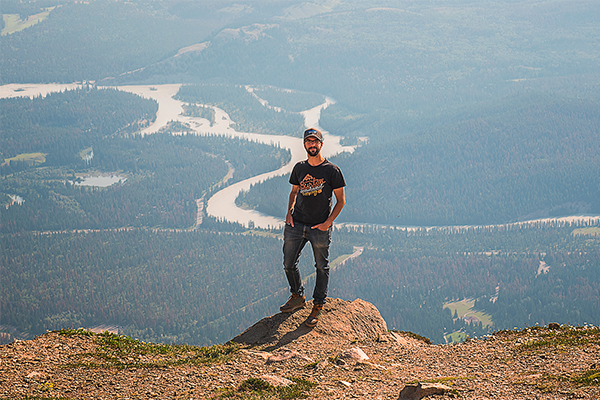 The Trail is a family affair…

My family and I enjoyed memorable experiences on The Great Trail of Canada, from summer explorations in Banff to winter weekends in the Laurentians, and taking in fall foliage vistas minutes from our home.  There are grandiose landscapes to behold for hikers, cross-country skiers, cyclists and many more. The Trail is a family tradition I intend to keep alive!