“The greatest project in the history of the world.”

That’s how Valerie Pringle has been describing the Trans Canada Trail for decades. It’s no wonder that she’s dedicated her passion, energy and thousands of hours to seeing it develop and expand across the country.

Valerie is one of Trans Canada Trail’s longest-serving and most dedicated volunteers, leaving a mark on this organization like no other.

To recognize Valerie’s final term as Chair, Trans Canada Trail Foundation Board, we held an event in her honour, expressing our gratitude for everything Valerie has contributed over the last 20 years. We also announced the creation of the Valerie Pringle Trail Builders of Tomorrow Fund. 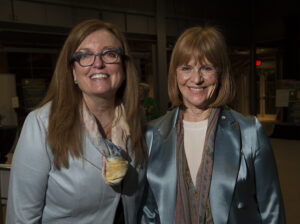 In attendance were people she met and worked with throughout her time at Trans Canada Trail. Heartfelt tributes were presented in person and via video by many people, including the Lieutenant Governor of Ontario the Honourable Elizabeth Dowdeswell, Toronto Mayor John Tory, Chief Stacey Laforme, former governor general the Right Honourable David Johnston, Canadian astronaut Colonel Chris Hadfield, chair of our Board of Directors, Michael Lindsay, family members and friends. The event was emceed by Eleanor McMahon, President & CEO, Trans Canada Trail. 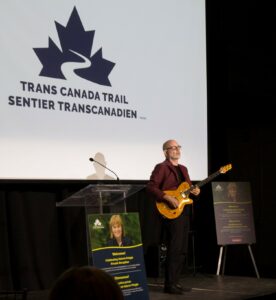 Levon Ichkhanian, an acclaimed guitarist, string musician, composer and producer who seamlessly and naturally blends the sounds of his Mideast heritage with jazz, provided musical entertainment. He is a passionate supporter of the Trail and dear friend of Valerie’s and his presence was treasured by all in attendance.

Making a dream a reality

It is in large part due to Valerie’s passion, perseverance, drive and determination – and lifelong love of the outdoors – that the dream of a national, connected Trail came true in 2017, during Canada’s 150th anniversary year.

She played an instrumental role in the connection of the Trail, and in building strong philanthropic relationships that contributed to our long-term financial sustainability as an organization.

A gift to future generations 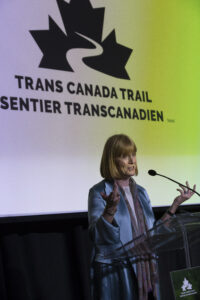 For more than two decades she has inspired countless people to embrace the vision of a connected and vibrant trail network, igniting widespread enthusiasm and support for the Trail as a gift to future generations.

Passionate and abundantly generous with her time, Valerie attended countless local trail openings around the country. Speaking warmly with everyone she met, she shared the essence of why the Trail matters: through the image of children growing up with access to nature; of feeling connected to people in Victoria, St. John’s and Tuktoyaktuk by walking one shared path; and of passionate volunteers stewarding the Trail across 15,000 communities.

In recognition of Valerie’s exceptional 20 years of service to Trans Canada Trail, we are proud to announce the creation of the Valerie Pringle Trail Builders of Tomorrow Fund. The creation of this fund ensures that we are able to carry on Valerie’s important legacy: to sustain and enhance our national trail for generations to come.

Stay tuned for more information and announcements about the details and activities of the fund, and how you can get involved.

Building on her legacy, Trans Canada Trail is poised to forge ahead toward an even brighter future.

We are profoundly grateful to Valerie for the incredible foundation that she helped build – one of connectedness from coast to coast to coast.

Trans Canada Trail’s Accessibility Mapping Program, in partnership with AccessNow, expands to all 13…
See All News
Thank you