“I feel comfortable and at peace when I’m on the Trans Canada Trail,” says Hugh Scott, MD. 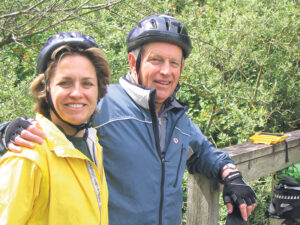 With a viewpoint like that and a decades-long history of being involved with the Trail as a community partner, donor and volunteer member of the Trans Canada Trail Board of Directors (2003-2009), not to mention doing cycling trips in various places across the country over the years with both his wife, Paule, and his daughter, Jacqueline, it’s no surprise that Hugh was thrilled to have the opportunity to become a torchbearer for the Trans Canada Trail portion of the Niagara 2022 Canada Summer Games Torch Relay.

Hugh had one additional hope for this experience – to share the honour with his beloved granddaughter, Léa. When he learned she would be able to accompany him on the torch relay route, his delight was palpable.

“From the time Léa was very young, we have explored various sections of the Trans Canada Trail together,” says Hugh. “Sometimes we rode bikes, other times we walked, but we always enjoyed the wonder of nature with each other. To have the opportunity to share the torchbearer experience with her on our national trail is incredible!” 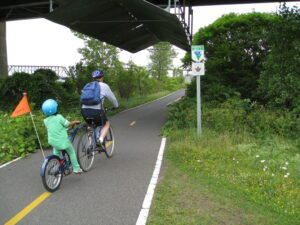 The Roly McLenahan Canada Games Torch was lit at the Centennial Flame on Parliament Hill in Ottawa on June 6, 2022, kicking off the flame’s eight-week journey to the Canada Games opening ceremonies on August 6 in Niagara, Ontario.

For the first time in history, the Canada Games torch was transported along the Trans Canada Trail, starting in Ottawa and continuing through eight communities within the province of Quebec. 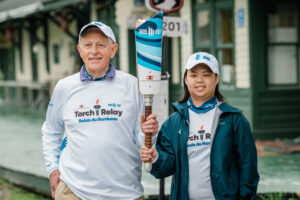 Hugh and Léa on the Trail together again, this time carrying a flame!

Léa joined Hugh on his leg of the travel route on June 9, when he received the torch from Bernard Pilon, former director of le P’tit Train du Nord. Hugh walked with it for several hundred metres and then passed it on to his granddaughter.

As they always do, they connected in this special moment: to each other, to the land they were walking on, and to the people around them.

“It’s one of the things I love – this feeling of interconnectedness – that makes the Trans Canada Trail so unique,” says Hugh.

A memory that will endure

With their leg of the Torch Relay now complete, Hugh and Léa have a new memory they can cherish for years to come.